If you have a fish tank that is around 55 to 75 gallon in size, I would strongly suggest you get your fish a power head. Personally, I am a fan of a power head or wave maker. You can either get a mild wave maker for your coral, or a powerful power head to provide the strong wave to your fish.

Isn’t it nice to have hygger strong power head to make the fish believe, that they still live happily in a real river or in a real sea? They will get enough exercises in the current and look fit. The hygger powerhead is also going to get rid of the dead spot in the water, and when it agitate the water surface it will also oxygenate the water.

Now I am going to introduce to you my personal favorite aquarium light! First of all, this light is laser thin. It is super easy to use. You could set the local time and let it run its automatic 24 hour’s cycle of dawn, noon and moon, and can also decide via the DIY mode, how long the light is going to be on. Further, you could choose between 6 hours, 10 hours and 12 hours, and change between 5 different intensity and different light color.

Hygger 978 LED Fish Tank Light features a super-bright 6500K white LEDs paired with the full-spectrum RGB LEDs to emit bright light to bring out the colors of your fish and plant. Ideal for used in fish-only tank and planted tank. 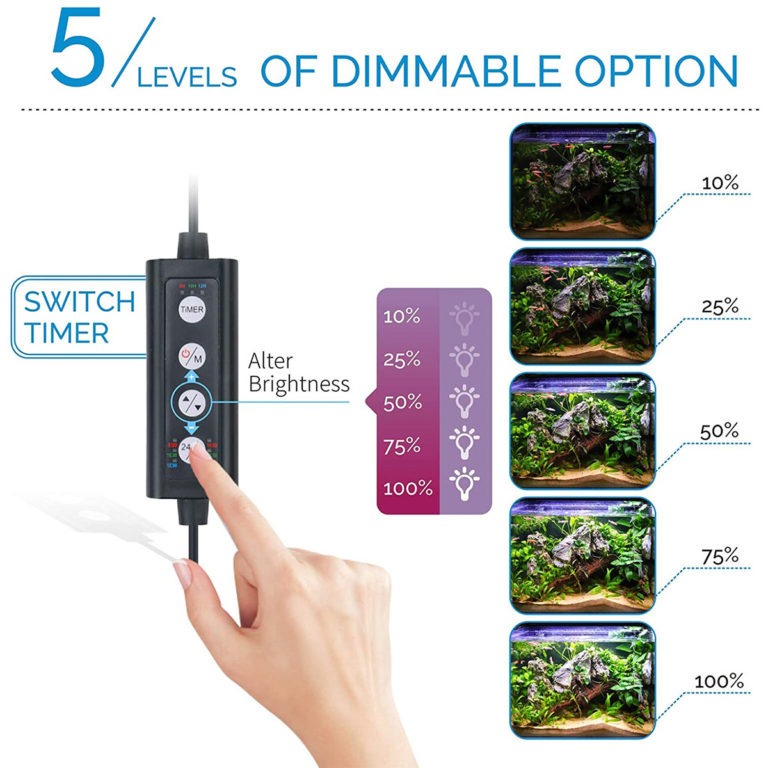 Looking for a heater that could be used in 55-75 gallon fish tank?

This Hygger fast-heating heater has a digital control, which with easy readout and is very accurate to 0.1 degree. Hygger fast-heating heater is a smart heater for several reasons. As it starts to approach its targeted temperature within minutes of starting temp; it slows down within the last 2 degrees, so it’s accurate not to over heat the water for a close to perfect reading.

I really love how the heater shows me when its heating or when its idle. More often that not, people tend to forget to turn off the heater; or the water evaporates faster than we thought, then the heater is going to be exposed to the air. Once the heater is out of water, it will automatically turn itself off; when it was submerged, it will be working normally again. If it was over 93.5°, it will indicate false code EE; when it was over 97°the heater will stop heating until it falls back into 93°. Fluctuation in Temps was stressing your fish out.

Hygger fast-heating heater has much better control over consistent water temps, it is designed to the point your fish will be healthier and your electric bill will be less! The low water error function is a very nice feature. It can outlive the other heaters that you have used in the past.

Either way it’s a good quality heater, and I’m sure you are going to be happy with this light.