Dear friends, have you ever heard about a fish with a light? That sounds interesting, right? Exactly, angler fish is one kind of fish with light, which lives in the oceans. Nonetheless, some people insist that angler fish are ugly. And others even do not want to know more about angler fish. In the article today, we will further talk about angler fish.

A fish with a light 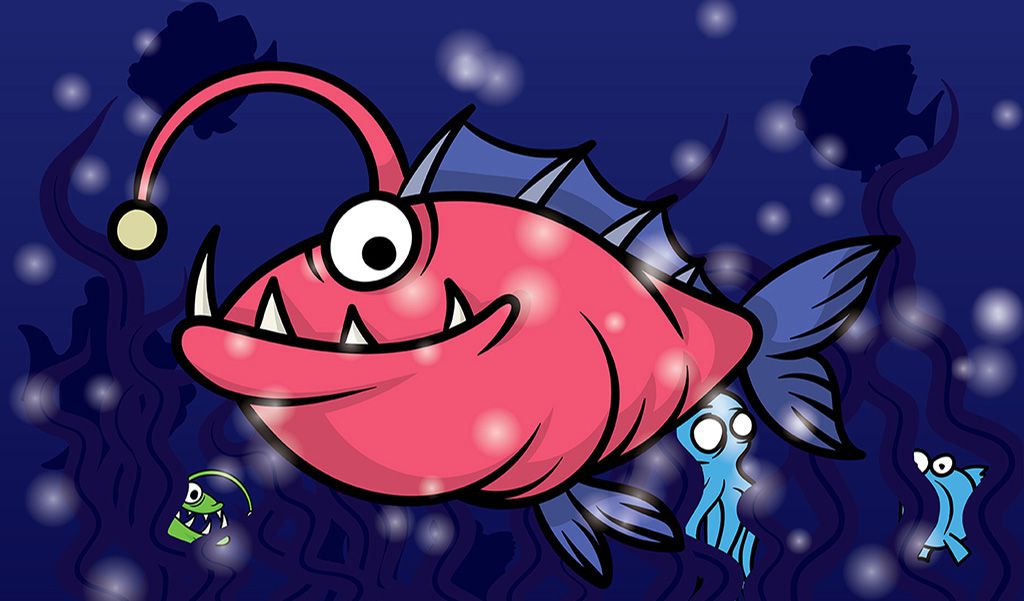 As we have mentioned above, angler fish live in the oceans, somewhere in dim light. Hence, the light would be an eye-catcher. As a result, the luminescent fin of angler fish can be a lure to attract prey. But the male ones do not use it to hunt. As for male angler fish, their digestive system makes no sense after they become adults. They just search for females to mate with and then live a parasitic life. It means that only female angler fish prey on food, rather than males. Unluckily, it is difficult to find mates in deep oceans.

When a male angler fish finds a female one, the male will bite the female’s skin and fuse into her body. Then the male attaches to her skin and blood, while also losing eyes and internal organs. Finally, only the testes are left and become a lump to produce sperm. And usually, many male angler fish attach to one female. 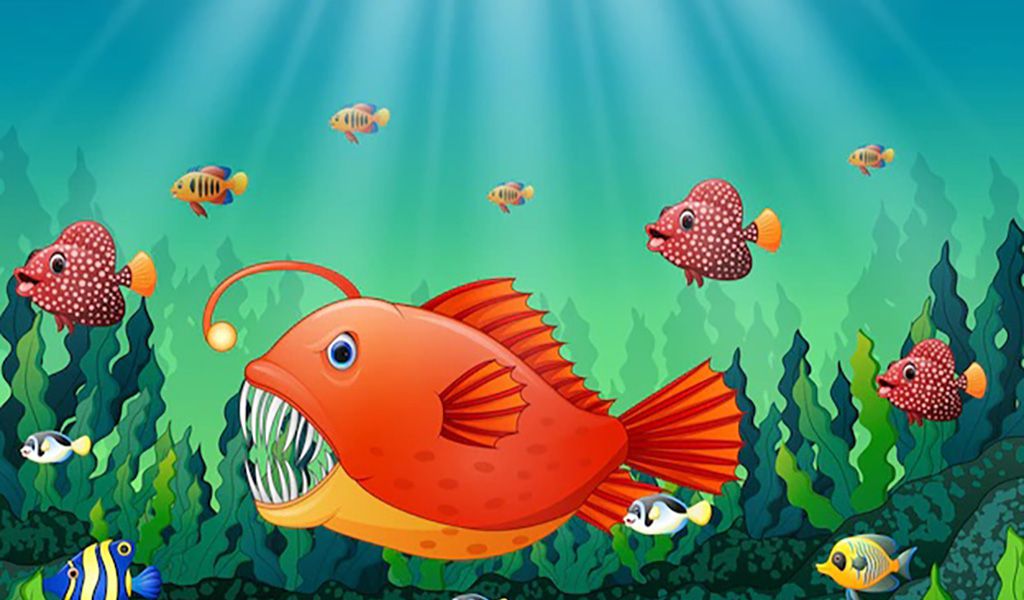 How big is an angler fish

There are diverse species of angler fish, more than 200 species. Some live in coral reefs, while others live in deep oceans or ocean bottoms. Also, some live near the shore. Actually, it is feasible to keep small angler fish from shallow water in an aquarium, but it may be time-consuming. On the other side, most angler fish are carnivores and are not picky in their diet. Live and dead prey can be food sources for angler fish, for instance, fish, squid, shrimp, snails, sea turtles, and other invertebrates.

Seeing that the angler fish has a large mouth and flexible bones, it can swallow food as large as itself, especially female angler fish. And the ability to expand its jaw and stomach allows the angler fish to eat more food or stock food. Usually, most angler fish can grow up under 12 inches, while others even reach 40 inches long. Nonetheless, the biggest one can be 47 inches long. But the female ones are larger than the male ones. And angler fish can swim fast if they feel danger. Sometimes, the fish may even swim inversely. 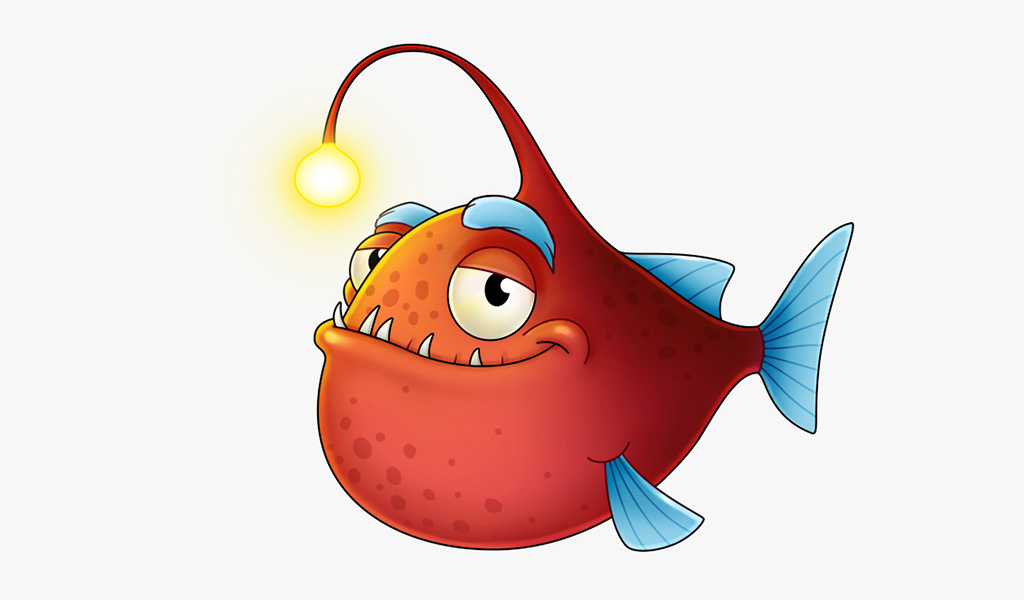 Aside from angler fish, another fish can give out light, named “Lanternfish”. In this segment, we will make a comparison between angler fish and lanternfish.

Besides that, angler fish and lanternfish are different in appearance. With sharp spines between the tail and the body, the angler fish is rounded. And it has a large mouth as well as inclined and depressed teeth, which allows angler fish to eat food as large as itself. On the other hand, with a round body and thin tail, lanternfish have silver-gray scales. Additionally, the lanternfish can reach up to 6 inches, while the angler fish can grow up to 12 inches. 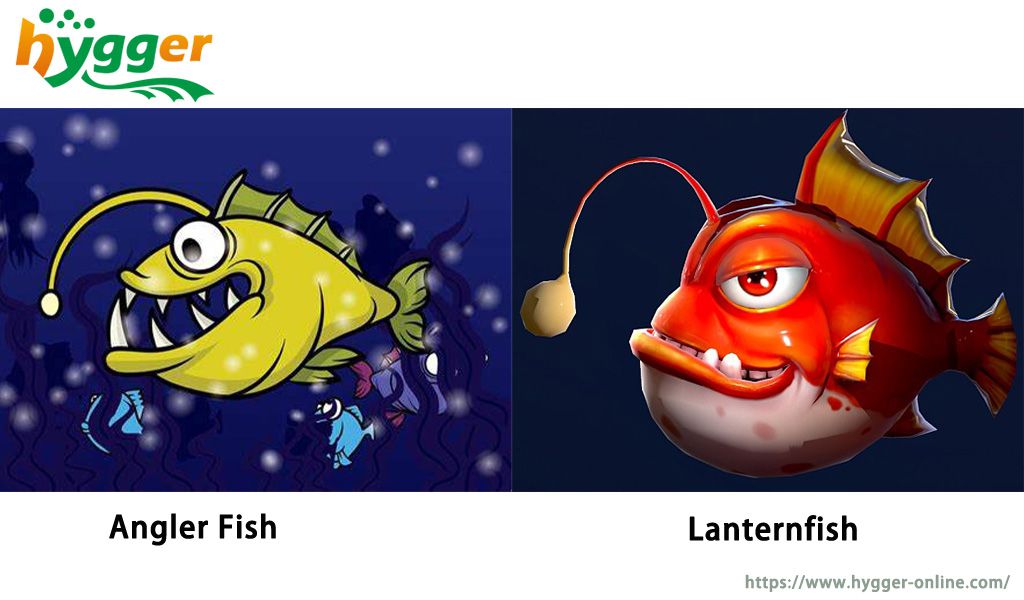 On the other side, angler fish and lanternfish are varying from light features. Angler fish has a luminescent fin – a bioluminescent temptation. It is mainly to lure and catch prey. While lanternfish possess the light of bioluminescence. It is the luminaries on the head, eyes, and tail. And it can emit diverse colors, like blue, red, and purple. The main purpose of bioluminescence is to protect itself from predators. After lighting up, lanternfish would become invisible.

Furthermore, the living areas of angler fish and lanternfish can be different. angler fish is a bottom dweller, living 2-500 meters below sea level. Conversely, lanternfish prefer living in the middle areas.

Angler fish would not bite humans, but if you can not stand the appearance of angler fish, it is not recommended to keep one in your saltwater aquarium. If you plan to introduce one, do not forget to choose a suitable tank size, because they can grow to 12 inches on average. That is all for today. Any wonderful ideas about angler fish or lanternfish, welcome to share them with us in the comment. Finally, thank you for reading.

angler fisha fish with a light