How to Take the Ammonia Out of Aquarium

As a new fish breeder, after keeping fish for some time, you suddenly find that the fish in the tank appear lying on, loss of appetite, slow movement, and other lethargic performance, then your fish must be ammonia poisoning!

Ammonia, also known as Ammonium, is the most toxic substance in the fish tank.

In aquarium feeding, ammonia is usually present in two forms, one is ammonia NH3: a central nitrogen atom (N), a collection of three hydrogen atoms (H), and the other is ammonium NH4+ (ammonium ion), both of which have the following chemical structural formula.

The conditions for the transformation of ammonia to ammonium

The PH value determines the relative conversion of ammonia to ammonium, remember it is relative. Ammonia dissolved in water, forming ammonia (NH4OH), when the PH value <7, NH4OH will be all converted to ammonium, and ammonia is not present. The chemical reaction is as follows: NH3 + H2O = NH4OH = NH4+ and OH- (hydroxide), because acidic water can provide more H- ions to induce the conversion of NH3 to NH4+ (ammonium ions).

It can be said that PH can sway the concentration of ammonia, which in turn can control the harm of ammonia.

For example, if the PH value is 7.6 at 28 degrees, the ratio of ammonia is only 2.71% in a certain total amount; if the PH is raised to 8.0, the ratio of ammonia increases to 6.54%, and of course, the latter has a higher ammonia concentration and is certainly more toxic. It can explain why the South American fish, accustomed to acidic water, is particularly sensitive to PH, more mainly sensitive to ammonia and ammonium transformation in hard water.

What are the ways of ammonia production?

1. Fish breathing: fish can directly excrete ammonia produced in their bodies through their gills, which is part of the direct source.

2. Fish urine: fish urine contains ammonia, although not much.

Ammoniation is the first reaction that cannot be controlled after the fish is in the tank, and it is inevitable that the reaction will be opened and will continue even if the fish is dead, as long as you don’t fish it out, it will continue until the fish’s body is decomposed and transformed into other substances.

Ammonia is chemically stable and has excellent water solubility, the ammonia derived from ammonification is constantly being dissolved and accumulated in the water, reaching a certain concentration and becoming a threat to the lives of fish, and becoming the number one roadblock to burying many new fish farmers.

Like nitrifying bacteria (group), ammonia bacteria (group) is also composed of many groups of bacteria (such as Bacillus, Clostridium, Pseudomonas, etc.), they secrete protease, decomposition of protein medium organic matter in the fish tank in the strongest ability while releasing ammonia. Therefore, there will always be bacteria in the tank, but even bacteria can not raise live water and fish.

Fish tanks must have flora thinking and dynamic balance thinking. It means that there is organic matter containing nitrogen in the fish tank, such as food residue, fish feces, shrimp residue, and so on. The ammonia microorganism will always decompose them, day and night, so this ammonia effect is always dynamic existence, the ammonia content is proportional to the amount of organic matter. In addition, fish metabolism itself also produces some ammonia.

From this point of view, ammonia can not be avoided in a fish tank. 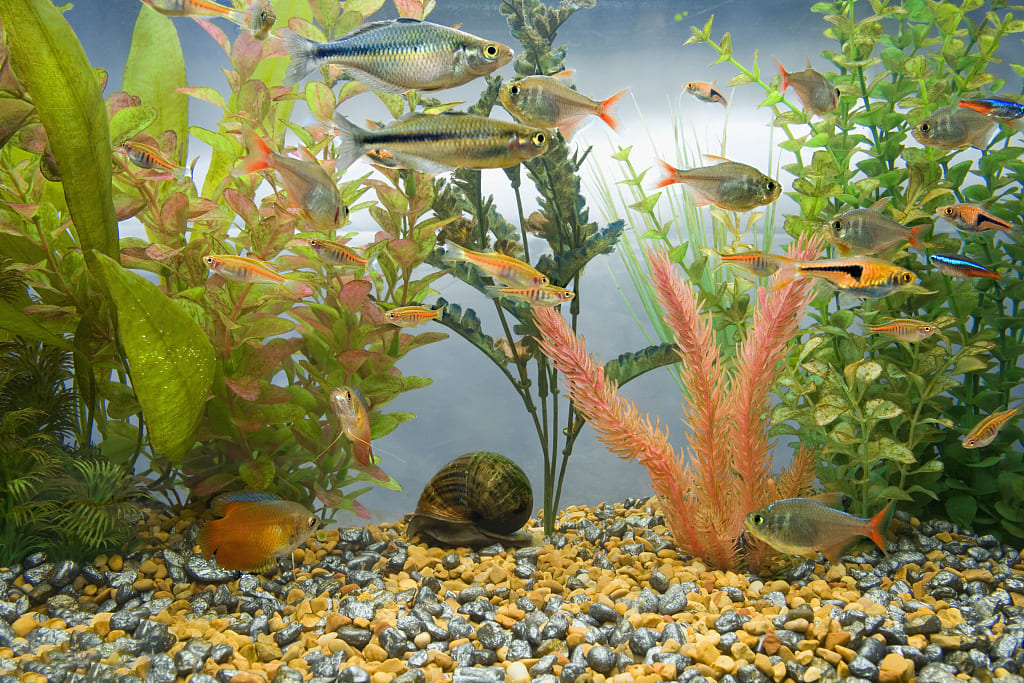 From the above ammonia production channels, it is easy to conclude that the higher the temperature, the faster the fish metabolism. The more and bigger the fish, the more defecation is produced. The more you feed, the more organic matter such as feces will be produced.

Therefore, if there are too many fishes in the opening stage, the concentration of ammonia will be uncontrollable, once this concentration exceeds the standard, the fish will die. This is the reason why experienced fish breeders have been opposed to the large density of fish in the early stage of tank opening. Only by strictly controlling the number of fish in the tank, the ammonia concentration will not be exceeded and time will be left for the reproduction of nitrifying bacteria.

The danger of ammonia concentration

Ammonia is very toxic to fish, ten times more toxic than nitrate. At very low concentrations, it can cause symptoms of poisoning and even death in many fish. The toxicity of ammonia to fish varies depending on the concentration and the fish, and the general situation is as follows：

Fish can tolerate it for some time, but it can be chronically toxic in the long run. Ammonia interferes with the osmoregulatory system of fish, destroys the mucous membrane layer of gills, and reduces the ability of hemoglobin to carry oxygen. Symptoms of chronic toxicity in fish include: gasping at the surface, gills turning purple or dark red, easy drowsiness, loss of appetite, inactivity at the bottom of the tank, and abnormal blood on the fins or body surface, etc.

Ammonia will accelerate fish mortality along with other diseases.

It will directly break the skin and intestinal mucosa of fish, causing bleeding on the surface and internal organs, and harming the brain and central nervous system. 0.05-0.2ppm is the lowest lethal concentration, and fish will die rapidly due to acute poisoning.

The toxin enters the blood through the gill filaments by the respiration of the fish and oxidizes the hemoglobin into high-valent hemoglobin, which causes the loss of oxygen delivery capacity, tissue hypoxia, and suffocation death.

The fish appear to scurry, and occasionally sink, lie on their sides, and spasm.

The gill covers are partially open and the gill filaments are purplish red or purplish black.

The fins are stretched, the roots are bleeding, the body color becomes lighter, and the mucus on the body surface increases.

Open the abdominal cavity, the blood does not coagulate, the blood color is dark, purple but not red, and the color of the liver, spleen, and kidney is purple.

Control of ammonia in a fish tank

Ammonia is strongly toxic to fish and will not affect their health only if it is controlled at very low concentrations. The following methods can be used to control the concentration of ammonia in a fish tank：

1. Change the water to reduce the concentration of ammonia. This is a short-term rapid ammonia reduction method, and can not solve the problem at all.

2. Adjust the water PH to weak acidity, that is PH < 7 states, that the water will be converted into non-toxic ammonium. But this method can not solve the problem at all, there is a potential threat of PH shock, and water changes can only be done as a short-term rapid ammonia reduction method.

3. Plant a lot of aquatic plants, aquatic plants can indirectly consume ammonia by absorbing ammonium, ammonium can be used as a nitrogen fertilizer to become nutrients for aquatic plants. At a certain PH as well as temperature, ammonia and ammonium will have a certain ratio of conversion relationship.

4. Establish a perfect nitrification system and cultivate a large number of nitrifying bacteria.

This method is an important part of the ecological balance system, nitrifying bacteria will directly decompose ammonia and convert it into nitrate eventually. As long as we can cultivate enough nitrifying bacteria, the concentration of ammonia can be kept in a very low, and stable safe concentration range for a long time, which is also a common method used in fish tanks without a lot of aquatic plants.

What exactly is in this tank of water, there is H2O, oxygen, nitrifying bacteria, other microorganisms, protozoa, mosses, grasses, minerals, organic matter, carbon dioxide, ammonia, nitrite, nitric acid, pathogenic bacteria, and other potentially harmful substances, and the important element of light.

What we call good water is to reduce the harmful things to a minimum, and maintain the beneficial things at a benign level.

The Hygger Aquarium Water Changer is an excellent choice for small to medium-sized aquariums. It is designed to change the water while cleaning the tank, saving you time and effort. It has a drainage bucket outlet that is flippable fits into the water changer’s reservoir and doesn’t disturb fish. A water pressure changer has many advantages, so you don’t have to worry about the aquarium odor. 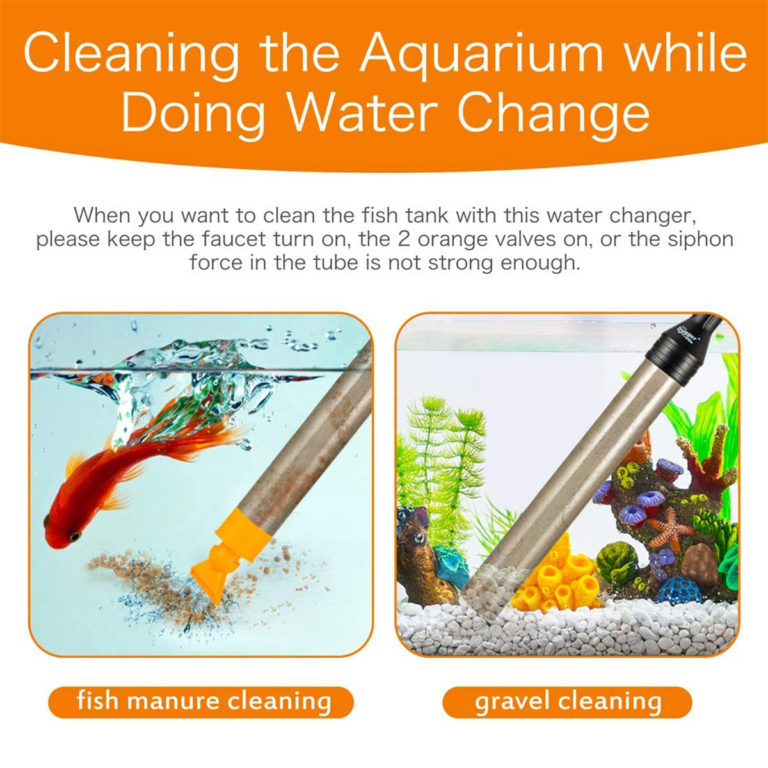 The Aquarium Water Changer features three-stage filtration, chemical and biological. It comes with a separate filter basket that contains 3 layers of filter media – a sponge, black bio balls, and an active carbon pellet. This tank filler is also convenient for gravel cleaning and maintenance. It comes with three different faucet adapters and works with standard threads on most faucets. The filter basket can drain and clean the gravel at the same time.

The Silencer has a siphon attachment to clean the gravel and the inlet tube. This tool is easy to use and comes with a built-in filter screen. This screen helps to prevent substrate and fish waste from getting sucked into the siphon’s inlet. When you’re done, simply close the valve and turn on the faucet pump or the siphon.

This water changer is equipped with a filter, and it has a water level indicator, which helps you know how much water you need to change each day.

In the aquarium, fish are the most important but vulnerable, it is worth investing a lot of time and energy to take care of them, we need to ensure as much as possible to change the tank water operation regularly, but also need to constantly pay attention to the growth of fish, so that the fish can away from “ammonia poisoning”.